A JOURNEY TO THE SOURCE 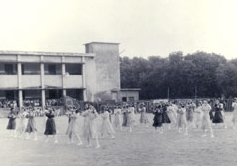 Today, at the twenty fifth milestone of our journey, when we look back on the past, we find that these twenty-five years are but a small fraction of our long distant past dating back to some three hundred years. In the following passage, we are going to take you back to the source of our journey and then bring you back to the year 1993 where we have reached.

What does the word mean? Nirmala is the name of Virgin Mary. It means 'purity'. Virgin Mary or Mary Immaculate is the mother of Jesus Christ, and this institution like thousand others is named after her. 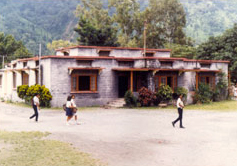 Mary is purity, piety, divinity all personified. She is the reflection of eternal light, a spotless mirror of the working of God and an image of His goodness.

The splendour of this reflection of the eternal light had touched the holy land of Ganga and Kaveri in the fourth decade of this century when the first batch of Ursuline missionaries came here. But then, who were the Ursuline missionaries? When and for what purpose did they come here? Come, let's go to the source to answer the above questions. 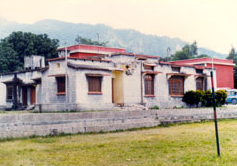 Mother Bridget belongs to the host of great mystics found in Catholic Europe during the 16th and 17th centuries. Born at Rapallo, Italy in 1610 she was favoured by Grace 'from her early childhood. She possessed all the gifts of contemplation, Prophecy and of miracles. In 1649, she founded at Piacenza Italy, the Institute of the Ursulines. She chose the blessed Virgin Mary as the heavenly patroness of her institute. The members of this institute are known as Ursuline Sisters of Mary Immaculate. Love of God and neighbour are the two dimensions of the mission embraced by Mother Bridget and transmitted to her daughter. 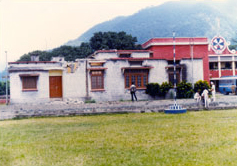 Mother Bridget was a contemplative (mystic) in action. She was a great Educator. The educator is conceived by her as "one who does great service to the lord" and the basis of Education is the holy fear of God which is an interior attitude.

Mother Bridget had an ardent desire to reach out to all the corners of the world with her loving service. This dream of Mother Bridget was realised three centuries later in Oct. 1934 when the first batch of Ursuline Missionaries came to India. Needless to say, India was undergoing a turbulent period of history at that time. The difficulties did not deter these pioneers in offering their service to humanity. The needs of the place led the pioneer sisters to dedicate themselves first, to the suffering members of society (by opening dispensaries and hospitals etc.) Later on, they undertook teaching the young namely, through schools, boardings and orphanages. They also got engaged in various social activities.

And so, the Institute continues to carry on and to nourish the missionary spirit of the Foundress in response to God's call and to the mandate of the Church "which is missionary of it’s very nature." 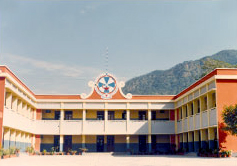 The piece of land which houses the three school buildings and the Home for the Aged was part of the Fonseca Estate which was sold. by Late Mr. Fonseca to Late Rt. Rev. Dr. Condrad -de-Vitto, the then Bishop of the Catholic Diocese of Lucknow. It was a dream of the Late Bishop to have a home for the Senior Citizens. For this purpose Bishop sought the co-operation of the Ursuline sisters. Mother Stephania Murelli, the then Provincial superior of the Ursuline sisters gladly accepted the invitation. A small batch of Ursuline sisters - Mother Stephania, Sr. Thomsina. Sr. Jesualda, Late Sr. Rosa and Sr. Josephine came to open the Home. The construction work was supervised by Fr. Jesuald, Father Anasthesius of the Capuchin order and by the master builder. Br. Julian Crasta who helped to complete the structure. The home for the aged was blessed and inaugurated on September 8, 1967 by Bishop Condrad -de-Vitto. 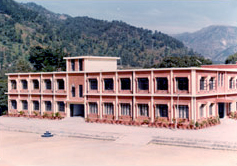 "GROW OLD ALONG WITH ME, THE BEST IS YET TO BE" Says Robert Browning.

People grow old in the hope of seeing the best, the desire to live never dies but brings each one of us to the threshold of old age. Blessed are those, who, in their old age don't lean on a staff and don't walk with shaking legs. But, such blessed ones are rare. In majority, are those who are sick, who can't walk steadily, and who can't see properly: the deaf and the dumb, the lame and the orphans. It was for such humble and helpless people that the home for the aged which is also called The Little Flower Convent was founded and continues to carry on its services.

Bishop's dream was, thus, realised with the whole-hearted support and co-operation of the Ursuline sisters but the task of the sisters was not yet over. The people of Kathgodam were eagerly looking forward to the next step to be taken by them- the opening of a school for their children. It was the need of the place and the residents of this place had deep faith in their service and guidance. 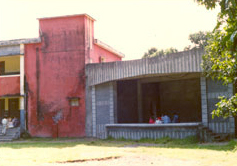 Today Nirmala Convent Sr. Sec. School is one of the leading educational institutions of the Town with a strength of over 1500 students and a team of about 50 well qualified efficient persons on the teaching staff. What a wonderful sight to look at :- children of different age groups, from the tiny-tots of class L.K.G. to the grown-ups of classes XI & XII playing, eating, chating and relaxing on this sprawling playground during the interval. But there was a time, when in place of this big playground there were green paddy fields, mango-groves and, .bisecting the green fields, a small pathway which led five little children to a small cottage. In the midst of the above fields and in the same cottage was founded Nirmala Convent School on 6 July, 1968. Mrs. Satya Patni, our senior-most staff-member tells us that at the time of its foundation she and Sr. Josefa were the two staff-members. 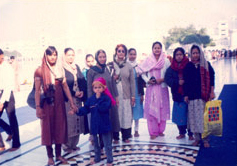 Onward we move from the year 1968 to the year 1972 when foundation was laid for a new school building on November 22 by Archbishop Cecil D'sa and in a year or a year and a half, a U- Shaped double storied building sprang up under the able supervision of Br. Julian Crasta.

A tender sapling planted by the Ursuline sisters in the midst of green fields had now grown up into a tree which exhaled the fragrance of its blossoms far and wide and on its branches, were seen over 500 busy-bees, collecting the honey of life. It was now Nirmala Convent Junior High School with a strength of over 500 students and a small bunch of dedicated teachers. It became a cosmopolitan garden with flowers of every breed and colour, a sanctuary in miniature, of unity in diversity. Surroundings changed; in place of green fields there stood a sprawling playground preparing those little ones who played on it for Barcelonas and Seols and the class-rooms became sanctuaries of learning where children, in silence and in reverence began to drink knowledge.

Let us now have a look at some of the important dates in the history of this institution:

24 May 1975:The School was recognised upto Class VIII under the Council of Anglo Indian Schools, U.P.
1 July 1976 :A step forward - Class IX started.
22 August 1978:The School was affiliated with the Central Board of Secondary Education (C.B.S.E.) Delhi
2 March 1979:First batch of 12 Students appeared for the C.B.S.E. All India Secondary School Examination
July 1980:In order to provide ample opportunities to the students to show and develop their latent talents the school Literary Association was formed and the young artistes of Nirmala began to acquit themselves on the stage through debates, elocutions, dance, drama and the like.
1 April 1991:The school was upgraded to class XI
2 March 1993:First Batch of class XII students appeared in A.I.S.S.C. Examination.

Today, at the 25th milestone of our journey when we look back on the past, we find thatwe have hopefully succeeded in preparing our students and then diverting them to different walks of life.We are thrilled with joy when we see our old students serving our country and the humanity at large as army-officers, doctors, lawyers, engineers, teachers, leaders and journalists. We wish them success and good lack. We are and will always be proud of them.